Alabama is one of the states of the US. The standard abbreviation for the “Yellowhammer State” as it is nicknamed is AL. The state capital is Montgomery. For fun ideas from the locals, check out Ask a Local!

The area that now forms the state of Alabama was originally settled by Native American tribes. The French, the Spaniards and the English claimed (pieces of) the area. The first permanent European settlement in Alabama was Mobile, which was founded by the French in 1702. Alabama formally became the 22nd state of the United States of America on December 14, 1819. Alabama’s economy was based on cotton cultivation, and many slaves worked on the plantations. During the American Civil War, residents sided with the Confederacy, meaning it wanted to break away from the United States. However, the Confederacy lost the war and so the state was rejoined the United States during the Reconstruction.

Rosa Parks, who was born in Alabama, became world famous for her refusal to give up her seat on the bus to a white person after a long day at work. In the second half of the 20th century, cotton cultivation lost importance. The economy became more diverse and prosperity increased. Nevertheless, in the elections of November 2, 2004, the population voted in favor of formally maintaining the apartheid laws. These laws deal with racial segregation in education and the poll tax. The laws are not applied because federal law prohibits it.

The state of Alabama covers 135,765 km², of which 131,426 km² is land. The state belongs to the Central time zone (CT). The state is located on the Gulf of Mexico and borders several states. It borders Tennessee to the north, Mississippi to the west, Georgia to the east and Florida to the south. The major rivers are the Mobile, the Tensaw, the Tombigbee, the Alabama, the Chattahoochee, the Coosa, the Tallapoosa, and the Tennessee. Alabama also has many large lakes, such as Martin Lake and Lewis Smith Lake. The northeast of the state belongs to the Appalachian Mountains, with the highest point being the top of Cheaha Mountain (734 m); the rest is flatter.

See how many cities are in Alabama. The gross product of the state in 2001 was $121 billion.

The Legislative Assembly sits in the Alabama State Capitol in Montgomery. Alabama is administratively subdivided into 67 counties that generally have little self-government. After the end of the Civil War, the Democratic Party dominated in Alabama, but in the 1960 elections, Republican Barry Goldwater won. After 1980, Republicans began to gain more ground, especially at the federal level. In the 2004 presidential election, George W. Bush won the state with 62.5% of the vote.

Learn all about space travel at the US Space & Rocket Center, the world’s largest space museum. In this interactive museum there is much to experience for both young and old. Admire the original mighty Saturn V rocket and step into the capsule of the Apollo 16. You can even go to space camp and experience what it is like to go on a space mission.

The Barber Vintage Motorsports Museum holds the largest private collection of cars and motorcycles in the world. The museum is located in Birmingham and is highly recommended for motorcycle enthusiasts. The collection has more than 1300 vintage and modern motor vehicles 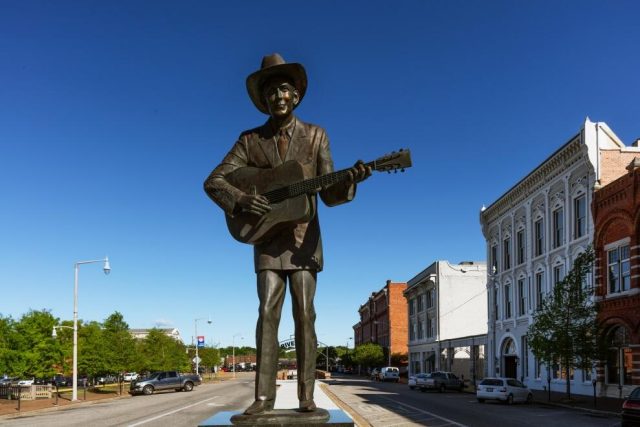