Alaska is one of the states of the United States. With an area of ​​1,481,347 km², it is by far the largest state in the country. The standard abbreviation for “The Last Frontier”, as it is nicknamed, is “AK”. The capital is Juneau.

The area that now forms the state of Alaska was first colonized about 12,000 years ago by Eskimo peoples such as the Yupik and Inuit and by various Native American tribes. They reached Alaska via the Beringland Bridge, the then dry or frozen Bering Strait. Most eventually moved further into the Americas. The first Europeans to explore the area came from Russia. On August 20, 1741, the Danish-Russian explorer Vitus Bering reached the Gulf of Alaska during one of his expeditions and saw Mount Elias. He landed on Kayak Island, an island off the coast, and sailed past the Kenai Peninsula and Kodiak Island. Partially following the Aleutian Islands, the ship sailed back to Kamchatka Peninsula, in Russia, eventually landing on Bering Island. There Bering finally died, during the hibernation, to scurvy. The Russians named the sea between Russia and newfound Alaska after him, the Bering Strait.

At the instigation of Secretary of State William Seward, the United States purchased Alaska from Russia on April 9, 1867. The price they paid for it, $7,200,072, was not high, because Russia thought the country was worth nothing. The formal transfer of sovereignty took place on October 18, a date that has since been celebrated as Alaska Day. The Alaska purchase was not very popular in the US and it was called Seward’s Folly. Until 1884, the future state was called the Department of Alaska and then, until 1912, the District of Alaska. It formally became a US territory in 1912 and 47 years later, on January 3, 1959, it was admitted to the Union as the 49th state.

The time since the purchase has shown how little was actually paid for the area. Gold, coal, oil and other natural resources now mined in Alaska have prospered the state. In addition, the location of the area was extremely strategic with regard to both the Pacific War and the Cold War. Had the Alaskan purchase not taken place, the Soviet Union would have had a beachhead in North America, which would have profoundly affected the course of history.

During World War II, some islands in the Aleutian Islands were taken by Japanese forces as a diversion from the upcoming Battle of Midway. Attu, Agattu, and Kiska became the only part of the present-day United States to be occupied by enemy forces during the war. On Good Friday in 1964, Alaska was hit by one of the most powerful earthquakes on record. The quake, which measured 9.2 on the Richter Scale, killed 131 people, mostly from tidal waves the quake had caused. At the beginning of the 21st century, Alaska was still one of the least populous states in the US with a population density of only 0.42 per km².

The state of Alaska covers 1,717,854 km², of which 1,481,347 km² is land and 204,425 km² is water. It is by far the largest of the fifty states. Most of it is in the Alaska time zone while some of the Aleutian Islands are in the Aleutian Islands-Hawaii time zone. Northern Alaska extends above the Arctic Circle. Alaska borders only (to the east) with Canada and none of the other US states. The south of the state lies on the Pacific Ocean, the west on the Bering Sea and the north on the Arctic Ocean. Alaska also has many islands, such as the Aleutian Islands, Kodiak Island, Saint Lawrence Island and the islands of the Alexander Archipelago. The southern narrow strip of land extending south is called the Alaska Panhandle.

Alaska is simultaneously the northernmost, westernmost, and easternmost state of the United States; some Aleutian Islands (unlike the rest of the US) are located in the Eastern Hemisphere. Much of the state is dominated by several mountain ranges. Mount McKinley is the highest mountain in North America at 6,194 m. The main river is the Yukon, which flows from the Canadian territory of the same name to the Bering Sea. Alaska has many protected natural areas such as national parks and other protected ecosystems. More than 65% of Alaska is in the hands of the federal government, mostly as a nature reserve. The capital, Juneau, is the only state capital of the US that can only be reached by plane or ship. There are no roads from Juneau to the rest of the state or to Canada.

Denali National Park is Alaska’s most popular national park and one of the most spectacular in America. Mount Denali is the highest mountain in the US and can be seen on a clear day. Many wild animals live in the park, such as grizzly bears, black bears, moose and beavers. In the park you will find many glaciers, hills and countless crystal clear lakes and rivers.

The immense Glacier Bay consists of glaciers, rugged coastlines and high fjords. The park can only be reached by boat or plane and is everything you expect from Alaska. There are also numerous opportunities to admire the park from a boat. 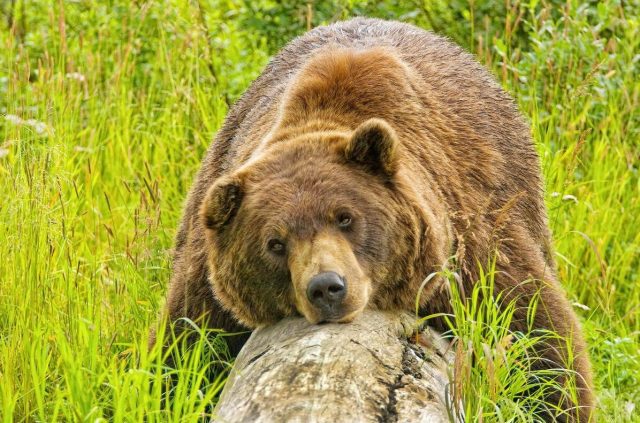