Georgia (Dutch, obsolete: Georgia) is one of the states of the United States. The standard abbreviation for “The Peach State”, as it is nicknamed, is GA. The capital is Atlanta. For fun ideas from the locals, check out Ask a Local!

Before European colonization, the area now called Georgia was populated by Indian tribes such as the Cherokee. The first European to spot the state may have been Spaniard Juan Ponce de León, who explored the Florida coast by ship. In 1526 Lucas Vasquez de Ayllon attempted to establish a colony there, possibly near what is now St. Catherine’s Island. The Spanish explorers afterwards left a trail of destruction.

In the 18th century, despite Spanish rule over neighboring Florida, the English held a firm grip on Georgia. In 1724, the first suggestion was made to give the area its current name, in honor of King George. On February 1, 1733, the first settlers landed in what would later become the city of Savannah.

Georgia was the southernmost of the thirteen colonies that revolted against British rule (see American Revolution). On January 2, 1788, Georgia became the 4th state of the United States. During the American Civil War, the state sided with the Confederacy. Also in the 20th century, racism and segregation played a major role in Georgia. In the early 1960s, Governor Ernest Vandiver vehemently opposed the admission of black students to the state university.

The state of Georgia covers 154,077 km², of which 150,132 km² is land. The state is in the Eastern time zone. Georgia is located on the Atlantic Ocean. It borders Tennessee and North Carolina to the north, Alabama to the west, South Carolina to the northeast, and Florida to the south. The northwest belongs to the Appalachians mountain range; the rest of the state is quite flat. The highest point in the state is the summit of Brasstown Bald (1458 m). The main river is the Savannah, which flows into the Atlantic Ocean at the city of the same name and defines much of the border with South Carolina.

In 2000 Georgia had 8,186,453 inhabitants (53 per km²). The gross product of the state was $275 billion in 1999. Capital Atlanta is by far the largest city in Georgia. Other cities include Savannah, Macon, Columbus and Augusta. See how many cities are in Georgia.

Atlanta is the capital of Georgia and a must see when you visit the south of the US. In this modern city you will experience a special mix between southern traditions and modern buildings. There are many top attractions such as World of Coca-Cola, Georgia Aquarium (one of the largest aquariums in the world) and many historical museums. Atlanta was the birthplace of Martin Luther King, Jr. and an important place from the American Civil War. 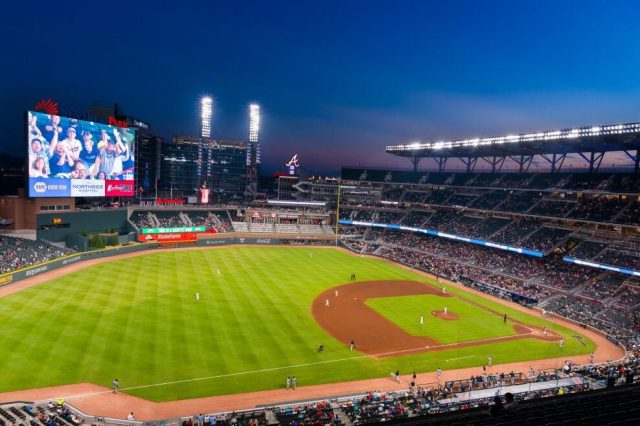