The life of the land is perpetuated in righteousness

Hawaii or Hawaii[1] (English: Hawaii, Hawaiian: Hawaiʻi) is the fiftieth state of the United States of America. The capital is Honolulu. The state has 1,262,840 inhabitants (2004). The standard abbreviation for Hawaii is HI. Are you looking for travel information about Hawaii? Then read the information below.

The state is made up of 137 volcanic islands (most of which are small and uninhabited) in the mid-Pacific Ocean, the most important of which are the Hawaiian Islands, an archipelago of 19 islands. There are 8 main islands; from west to east:

The islands are of volcanic origin: They are located on a so-called hotspot, where magma from the interior of the earth comes out as lava. As the Earth’s crust moves relative to the hot spot, a row of islands was created from west to east, with the oldest, dead volcanoes in the west and the youngest, active ones in the east. Currently, the volcanoes Kilauea and Mauna Loa on the largest island of Hawaii are still very active; possibly this also applies to Mauna Kea. Kilauea, in the Volcanoes National Park, has almost continuous eruptions, which are well visited by tourists. Mauna Loa has a new eruption about every 20 years, for Mauna Kea an eruption every 4000 years is not excluded.

Another 30 km further east, far below the sea’s surface, a new volcano, Loihi, is building a new island that will rise above sea level in 10,000 years. Mauna Kea (White Mountain) is the highest mountain in the world measured from foot to top: the mountain rises 9,000 meters above the sea floor, and 4,207 meters above sea level. Mauna Loa (Tall Mountain) is the heaviest mountain in the world; it is only a few meters lower than Mauna Kea, but has a wider base.

House Of The Sun

Mount Haleakala (Home of the Sun), a volcano on Maui, is particularly popular with tourists. It is easy to travel the 55 km long road to the top in a rented car. At the very top of the mountain is a parking lot. Many tourists go to the top of Haleakala to admire the sunrise or sunset there. This is a particularly spectacular experience, not least because from that position right at the top of the mountain you can look all the way around and see the Pacific Ocean on all sides. The volcano is part of Haleakala National Park.

When you think of tips and travel information about Hawaii, you naturally immediately think of the special culture. Although the natives are now a minority in their own country, much of their cheerful and friendly Aloha spirit can still be seen. Some of the old Hawaiian customs adopted by the tourist industry are the luau (big party) and the lei (flower wreath).

Hawaii has been inhabited by Polynesians since about 400, probably away from Tahiti. These were very good seafarers, and spoke a Polynesian language, Hawaiian. The Hawaiian sound system has only 7 consonants, and the language therefore sounds very quickly recognizable. While it is believed that the islands may have been seen by the Spanish as early as the 16th century, James Cook is the official European ‘discoverer’ of the islands, which he named the Sandwich Islands. Under the influence of contacts with Europeans, King Kamehameha I united all previously often hostile islands into one kingdom. The Hawaiian kings pursued a policy of hospitality to strangers, but for example playing the English against the Americans.

In 1893, a number of American sugar planters staged a coup, placed Queen Liliuokalani under arrest and opened the door for American conscription later that year. The attack on Pearl Harbor (on the island of O’ahu) on December 7, 1941 by the Imperial Army of Japan resulted in the United States getting involved in World War II. The area remained an American Territory until 1959. By now the original population had become a small minority in their own country and the population decided to become a US state, which happened on August 21 of that year. Only one of the islands, Niihau, still has an entirely autochthonous character; it is entirely private property and is not accessible to outsiders unless by invitation.

Hawaii is divided into five counties, which more or less coincide with the island territories. The counties also function as municipalities. See how many cities are in Hawaii.

There are five volcanoes on the island of Hawaii (The Big Island), several of which are located in this national park. Due to the large differences in height and difference in precipitation, the flora and fauna is enormously varied. From desert areas to lush green rainforests. The lava flows ensure that the landscape is constantly changing.

House Of The Sun

Haleakala is a large volcano on the island of Maui, covering over 75% of the island. Haleakala Crater is the highest point on the island with a peak of 3,055 meters. It is the largest dormant volcano in the world. On the island you will find beautiful valleys and ravines, waterfalls, rainforest, rocky coasts and sandy beaches. 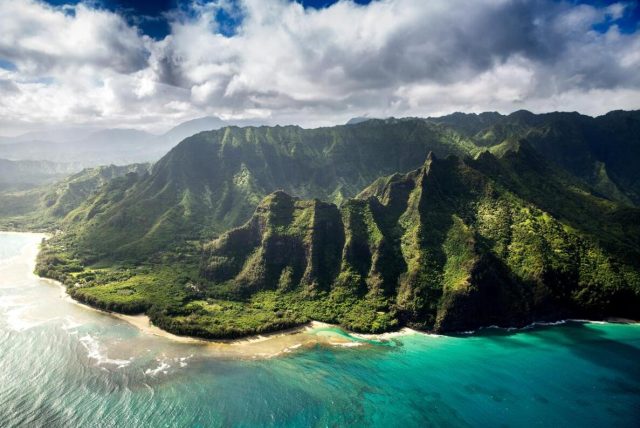