Idaho is one of the states of the United States. The standard abbreviation for the “Gem State”, as it is nicknamed, is ID. Another nickname is “Potato State”. The capital is Boise.

The area now called Idaho was originally settled by Native American tribes such as the Nez Perce. There are still a few large reserves in the state. Idaho is part of the Oregon Territory, an area that formally became part of the United States in 1846. On March 4, 1863, President Abraham Lincoln signed a bill creating the Idahot Territory. At that time, only about 17,000 people lived in the area. Many passed through it on their way to the West Coast, especially during the California Gold Rush of 1849. In 1866, gold was discovered in Idaho itself. This and the completion of the transcontinental railway in 1869 brought many people to the region. When President Benjamin Harrison signed the law formally making Idaho the 43rd state of the United States on July 3, 1890, 88,548 people were already living there.

The state of Idaho covers 216,632 km², of which 214,499 km² is land. The north is in the Pacific time zone, the south in the Mountain time zone. Idaho is bordered by Canada to the north, Washington and Oregon to the west, Montana and Wyoming to the east, and Nevada and Utah to the south. The main river is the Snake River, which forms part of the border with Washington and Oregon. The largest lakes are Coeur d’Alene Lake, Lake Pend Oreille, Bear Lake, and the American Falls Reservoir.

Much of mountainous Idaho is occupied by the Rocky Mountains, the highest point of which is Borah Peak (3,859 m). The state is rich in natural beauty, such as the lava from Craters of the Moon, the Hells Canyon, which is deeper than the Grand Canyon, and the Balanced Rock.

In 2000, Idaho had 1,293,953 inhabitants (6 per km²). Most people live in the northwest and south. The largest cities are capital Boise, Pocatello and Idaho Falls. See how many cities are in Idaho. The gross product of the state was $37 billion in 2001.

Craters of the Moon

The bizarre nature in the Craters of the Moon National Monument & Preserve is one of the examples of the volcanic activity in this region. In the last 15,000 years, multiple lava eruptions have created a rugged, black landscape of more than 1000 km2. The lava fields have a surprising diversity of plant and animal species, including widespread plains full of sagebrush. 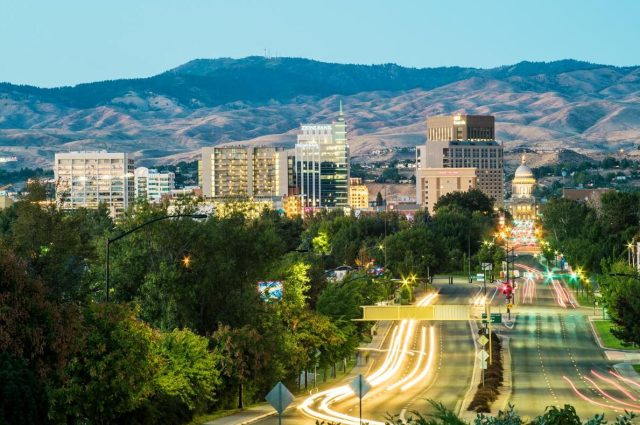