Kansas became the 34th state of the United States on January 29, 1861. The capital is Topeka. The name comes from the Sioux word kansa, which means “people of the south wind”. Kansas is nicknamed The Sunflower State (“State of the Sunflower”). The standard abbreviation for the state is KS.

Kansas has an area of ​​213,283 km² and is almost rectangular. The average altitude is 610 m above sea level; the highest point is Mount Sunflower (1231 m). Kansas borders Nebraska to the north, Oklahoma to the south, Colorado to the west, and Missouri to the east. It is about the same distance from the Atlantic and the Pacific Ocean. Most of Kansas is in the Central time zone, but part of the western part of the state is in the Mountain time zone. Kansas is also the name of the great river in the east of the state, which flows from Tuttle Creek Lake and flows into the Missouri.

The state had 2,688,418 inhabitants (13 per km²) in 2000 and about 69% of the population lives in urban areas. The largest city is Wichita. Kansas City and some of its suburbs are located in Kansas, and are part of the metropolitan area that includes Kansas City, Missouri. See how many cities are in Kansas. Outside the urban areas, Kansas consists mainly of vast, very sparsely populated plains, which are used for both agriculture and livestock. The gross product of the state in 1999 was $81 billion.

Dorothy from L. Frank Baum’s book The Wizard of Oz lives on a ranch in Kansas. The “Little House on the Prairie” from Laura Ingalls Wilder’s book of the same name was also located in Kansas. The town of Coffeyville was home to the Dalton gang, best known for the Lucky Luke comics. 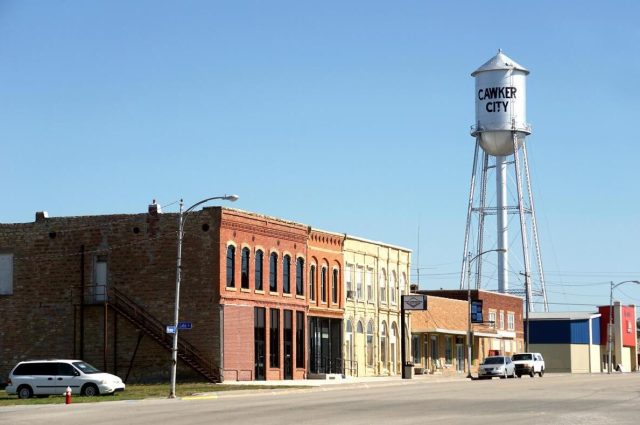