Maine is one of the states of the United States. The standard abbreviation for the “Pine Tree State”, as it is nicknamed, is ME. The capital is Augusta. The state belongs to the New England region.

The first settlement in Maine, Popham, dates back to 1607, and in 1652 Maine was annexed by the Massachusetts Bay Colony. Maine was formally admitted as the 23rd state of the Union on March 15, 1820 as a result of the Missouri Compromise. Portland was the capital until 1832, after which the more centrally located Augusta became this. Around 1840 a conflict arose over the border between Maine and the then British colony of Canada. Although no fighting took place, it has come to be known as the Aroostook War. Finally, the border with Canada was established in 1842 in the Webster-Ashburton Treaty.

The state may have been named after the former province of Maine in France (divided into the departments of Sarthe and Mayenne after the French Revolution). Another possible origin of the name comes from the nickname Mayne that inhabitants of the offshore islands had off the mainland, in English mainland.

The state of Maine covers 86,542 km², of which 80,005 km² is land. The state is in the Eastern time zone. Maine is located on the Atlantic Ocean and borders Canada to the north and east and New Hampshire to the west and south. West Quoddy Head is the easternmost point of the continental United States. Apart from the coastal areas it is quite mountainous and hilly. The highest point is the top of Mount Katahdin (1608 m). There are many islands along the coast. The main rivers are the Kennebec and the Penobscot. The state also has numerous lakes, of which Moosehead Lake is the largest. Most of the state is forested.

In 2000, Maine had a population of 1,274,923. This equates to 15 per km², making it the most sparsely populated state east of the Mississippi. The largest city is Portland. See how many cities are in Maine. Gross product in 2001 was $37 billion. 5.3% of the population is French-speaking, the highest percentage in the United States.

Acadia National Park is one of the most beautiful areas in the state of Maine. This national park is mainly located on a number of islands along the coast of Maine and is easily accessible by car. Loop Road is one of the most beautiful scenic byways in America and runs right through this nature reserve. Pass the rocky coasts, forests and mountains and enjoy the beautiful views along the way.

The atmospheric town of Portland is located in the middle of the wilderness. The Old Port district is the former harbor area and a nice neighborhood to visit. Located in nineteenth-century buildings, you will find various shops, galleries and restaurants. Mussels, oysters and lobsters are prepared here in their own way. 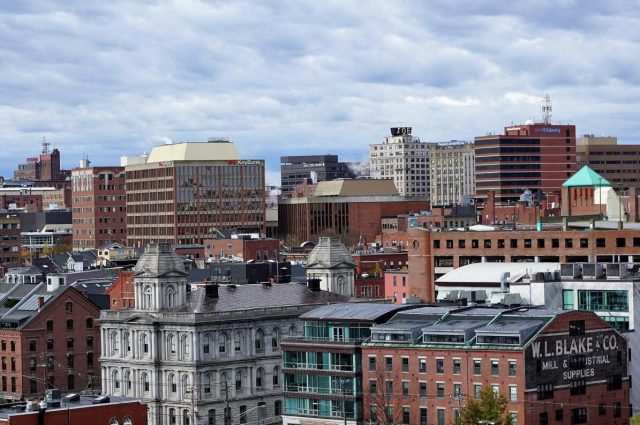