You should know these entrepreneurs

Some entrepreneurs have achieved considerable success and changed the world with their business idea. This includes the following entrepreneurs that you should definitely know:

The founder of Amazon is considered one of the most successful entrepreneurs ever. In the meantime he has managed to become the richest person in the world.

The inventor of the iPhone radically changed the way we communicate, work and use media. Even today, Apple is one of the most successful companies ever.

The major investor is a prime example of a multi-entrepreneur who is familiar with a wide variety of industries. His company’s stock is one of the most expensive on the market.

Arianna Huffington co-founded the successful newspaper “The Huffington Post”. To this day she is one of the most successful female entrepreneurs in the field of journalism.

Brian Chesky is a co-founder of the Airbnb community marketplace and an extremely successful entrepreneur. According to Times Magazine, he was one of the 100 Most Influential People in 2015.

The Microsoft founder has made computers accessible to everyone and has made a lasting contribution to shaping the digital age through his work. Microsoft is still one of the world’s tech giants today.

Claudia Helming is the founder and managing director of the e-commerce portal DaWanda. She is a successful founder who has made it into the circle of the most successful female entrepreneurs through tough work and perseverance.

Frank Thelen is one of the great entrepreneurs from Germany. He is the founder and managing director of the venture capital company “Freigeist Capital GmbH” and as such extremely successful.

The term effectuation approach comes from entrepreneurship research. This describes which procedures experienced entrepreneurs have to be able to make better decisions or to solve problems. This approach is based on three scenarios:
An entrepreneur offers one:

Based on the assumption that no market forecasts need to be made for any of the three scenarios, the effectuation approach states that the future cannot be foreseen, but it can be shaped.

Criticism of the effectuation approach

For many, the effectuation approach is a modern method in the field of entrepreneurship. It is seen as an alternative to the traditional approach, the causation . However, critics note that this method has so far only vaguely and only marginally captured the role that the personality plays of an entrepreneur. In addition, only the experienced entrepreneurs are in the foreground in the effectuation approach. This indirectly implies inexperienced entrepreneurs that they cannot demonstrate any fundamentally effective and causal behavior. But this is wrong.

Entrepreneurship as a management approach

Entrepreneurship can also be seen as a management approach. The focus is on recognizing business opportunities. But the focus is also on realizing these opportunities and using them for business purposes. But this does not only apply to a new or young company. Even a long-established company that is firmly anchored in the market can benefit from it. This approach is becoming more and more important in today’s times, as there is certainly turbulence and uncertainty in the economy.

Which degree can you choose for entrepreneurship?

There are now three types of Entepreneurship degree programs. This is initially the very classic business administration degree with a focus on entrepreneurship. There is also a bachelor’s degree in entrepreneurship for start-ups. If you still feel like studying or have the need to study, you can dare to take a master’s degree in innovation or technology management with your bachelor’s degree in your pocket. The question of why you should study entrepreneurship at all is not easy to answer. After all, there are enough counterexamples such as Richard Branson or Bill Gates to name just two. However, in contrast, a degree can mainly be found in the search for sponsors be very important. They spend money on an investment much faster if there is a founder on the other side who can demonstrate a solid university degree.

Entrepreneurship is used to describe entrepreneurship or the entrepreneurial spirit. Words related to this term are founding, startup, organizations, technologies, innovations. But it is not just the pronunciation that some find difficult. The wrong spelling Entrepeneurship occurs particularly frequently. 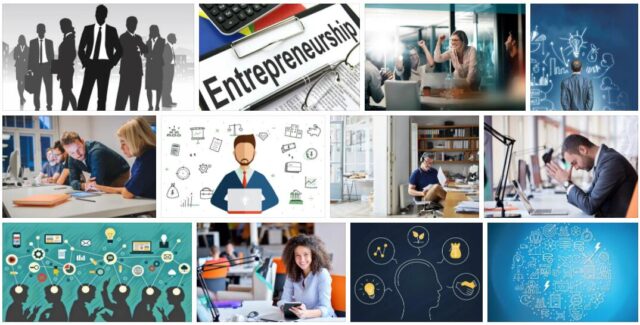