Michigan is one of the states of the United States of America. The standard abbreviation for the Wolverine State, as its nickname goes, is MI. The capital is Lansing.

The area that now constitutes Michigan was under French control as part of New France, the entirety of French possessions in North America, before it passed definitively into British hands in 1763. French names such as Detroit and Bois Blanc Island still remind us of this.

In 1805, Michigan became a separate territory from what was then the Northwest Territory. In 1835 a border dispute with Ohio arose, in which Ohio obtained the city of Toledo and the “Toledo strip”. In the same year, the state gained the Upper Peninsula (see below), which previously belonged to Wisconsin, in compensation. Michigan became the 26th state of the United States on January 26, 1837. During the American Civil War it belonged to the Union side.

The state of Michigan covers 250,941 km², of which 147,255 km² is land. The state consists of two parts: the Lower Peninsula (“Lower Peninsula”) and the smaller Upper Peninsula (“Upper Peninsula”). The two are connected by the Mackinac Bridge, which opened on November 1, 1957. Michigan is located on four of the five Great Lakes, namely Lake Huron, Lake Superior, Lake Michigan and Lake Erie. It borders Canada to the north, Wisconsin to the northwest, and Indiana and Ohio to the south. The island of Royale in Lake Upper also belongs to Michigan. The highest point in the state is the peak of Mount Arvon (603 m). Most of the state is in the Eastern time zone, but a small portion of the Upper Peninsula belongs to the Central

In 2000 Michigan had 9,938,444 inhabitants (40 per km²) of which more than 70% of the population lives in an urban area. The main cities are Detroit, which is by far the largest, capital Lansing and Grand Rapids. See how many cities are in Michigan.

At Mackinac Island it seems as if time has stood still. Cars are an absolute no-go here and everything is done on foot or by horse and carriage. In and around the Victorian city center you can still see several historic buildings such as Fort Mackinac. In any case, go to Mackinac Island State Park and take a bike ride through the beautiful green surroundings. Do you want to do something special? Take a tour by carriage and imagine yourself back in time. 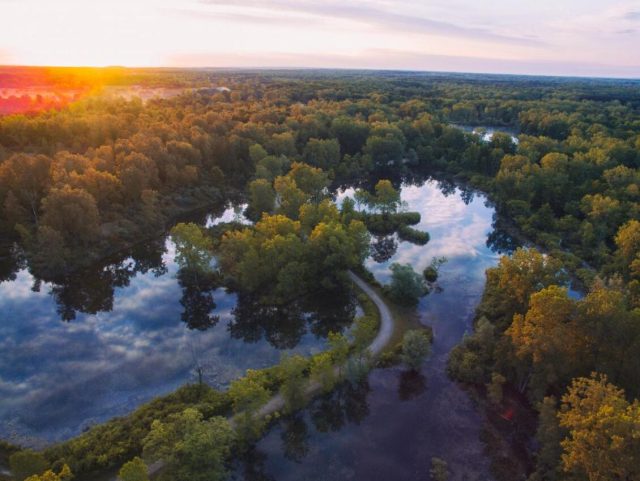