Missouri is one of the states of the United States. The standard abbreviation for the state is MO. The capital is Jefferson City. For fun ideas from the locals, check out Ask a Local!

The area now called Missouri was originally settled by Native American tribes. After that, the region was in the hands of the French for a long time. They colonized it and had slaves work in the lead mines, among other things. For several decades at the end of the 18th century, Spain controlled the area. France eventually sold it to the United States in 1803 (see Louisiana Purchase).

The Missouri Territory was created in 1812. When Missouri wanted to form an independent state, the fact that the region had slavery in the House of Representatives and the Senate sparked controversy. Finally, the Missouri Compromise was made and on August 10, 1821, Missouri formally became a state of the United States as the 24th. During the American Civil War, some parts of the state stayed with the Union while others joined the Confederacy. Many battles took place in Missouri. Missouri became the first slave state to abolish slavery in 1865.

The state of Missouri covers 180,693 km², of which 178,590 km² is land. It belongs to the Central time zone. Missouri is bordered to the north by the states of Iowa and Nebraska, to the west by Kansas, to the east by Illinois and Kentucky and to the south by Oklahoma, Arkansas and Tennessee. The main rivers are the Mississippi, which defines the entire eastern border, and the Missouri which flows into it. The south of Missouri is hillier than the north. The highest point is the top of Taum Sauk Mountain (540 m).

The Ozarks are located in both Arkansas and Missouri and you may be familiar with the popular Netflix series Ozark. The area is characterized by the many lakes and islands, but you will also find forests and mountains. The islands of Lake Ozark are often connected by bridges. The area has many water sports options.

The great city of blues, St. Louis has more than 40 professional theater companies, as well as a symphony orchestra, opera company, and several itinerant Broadway shows. The National Blues Museum is a must for lovers of blues. The museum showcases every aspect of blues music and lets you enjoy live music, interactive exhibits, and much more.

Missouri is also home to a large stretch of Route 66, one of the most famous roads in the US. Route 66 opened in 1926 as a route connecting rural communities to the larger cities across America. The quintessential American road trip was born! Route 66 is no longer an official highway, but many travelers have not forgotten this scenic road with countless opportunities for fun stops along the way. 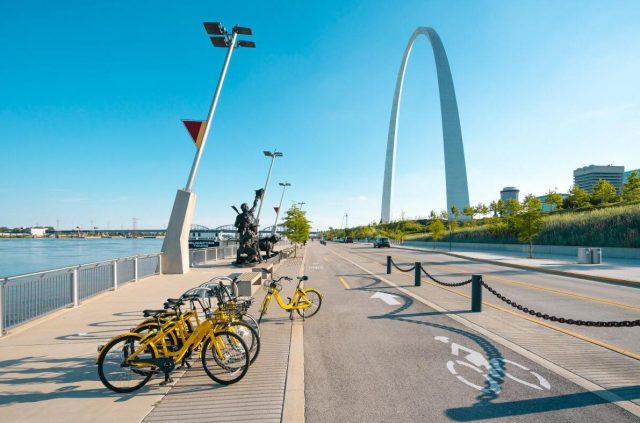