New Hampshire is one of the states of the United States and belongs to the New England region. The standard abbreviation for the “Granite State,” as it is nicknamed, is NH. The capital is Concord.

The area now called the state of New Hampshire was colonized as early as 1623, just three years after the Pilgrims landed in Massachusetts. It is named after the English county of Hampshire. New Hampshire was one of thirteen colonies that revolted against British rule in the 18th century (see: American Revolution). On June 21, 1788, New Hampshire became the 9th state of the United States. During the American Civil War, the state sided with the Union.

The state of New Hampshire covers 24,239 km², of which 23,249 km² is land. The state is in the Eastern time zone. New Hampshire is located on the Atlantic Ocean, although the coastline is only 25 kilometers long. It borders Canada to the north, the state of Vermont to the west, Maine to the east, and Massachusetts to the south. Large parts of the state are mountainous and hilly. About a quarter of the state is taken up by the White Mountains. In this mountain range is Mount Washington (1917 m), the top of which is the highest point in the state. The main rivers are the Connecticut River and the Merrimack River.

Writer John Irving was born in New Hampshire and much of his work is set there. In 1944 an international conference was held in Bretton Woods, at which the financial arrangement of the free world was arranged. Establishment of the International Monetary Fund and the World Bank.

The White Mountains is a beautiful forest and mountainous area and extends to Maine. You will find several state parks, lakes and rivers and endless hiking trails here. In the northeast of the White Mountains is Mount Washington, the highest mountain in North America. Drive the Kancamagus Scenic Byway and enjoy all the views.

A ride on the Conway Scenic Railway is an excellent way to discover the White Mountains. This historic railway consists of several routes. Take the Valley train, for example, and take a one-hour ride. Do you have more time? Then take the Notch train and make the beautiful 5-hour trip along many steep cliffs, waterfalls and high mountains. 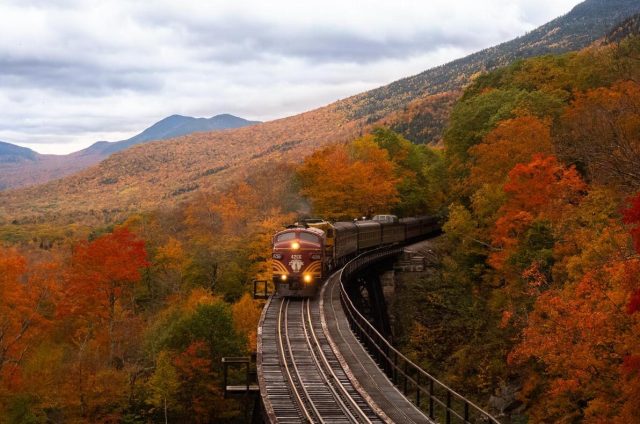