North Carolina (Dutch: Noord-Carolina) is one of the southern states of the United States of America. It was one of the original thirteen states that founded the Union and fought free from British colonial rule. The state is bordered by Virginia to the north, Tennessee to the west on the other side of the mountains, and Georgia and South Carolina to the south. See how many cities are in North Carolina. North Carolina has a coastline to the east with the Atlantic Ocean. Both Carolinas were originally named after King Charles I of England. For fun ideas from the locals, check out Ask a Local!

The original inhabitants were American Indians, including the Cherokee, who are counted among the Five Civilized Nations. Around 1830 they were forced to ‘move’ to the Indian Territory in Oklahoma, and this grueling journey cost many lives. However, some of them managed to hold their own in the inhospitable mountains on the western side of the state, and others returned later. Their descendants still live in the state. Yet the area was the first area where the British attempted to establish a colony in the 1580s at the hands of Sir Walter Raleigh after whom the state capital is named. However, nothing more was heard of one of his settlements on Roanoke Island.

The split in north and south

In the 18th century a number of settlements were established and in 1712 the colony was split into north and south. The two parts have a rather different character to this day. South Carolina was a slave state par excellence and the first state to secede from the Union, sparking the American Civil War. North Carolina did not secede until all its neighbors did, and reluctantly in 1861. Ironically, the surrender of the South took place in this very state, and the state suffered greatly during the Civil War.

The Reconstruction and the Jim Crow years after with their renewed repression of the black population condemned the state to long years of lagging behind the rest of the country. It was mainly an area of ​​tobacco growers and poverty. That only changed after the 1960s. The Civil Rights Movement’s transformation has been quite smooth compared to other cities in the south where tensions were running high. A technological change of major importance to the entire South and also to North Carolina was the advent of air conditioning. Without this equipment, the summer months are a time when hard work becomes a difficult task, it is too hot and humid for that. The technology was introduced after the 1960s. Between the towns of Raleigh, Durham,

The state is sandwiched between the Atlantic Ocean to the east with a wadden coast called the ‘Outer Banks’ and the Smoky Mountains to the west, which resemble the Ardennes or Vosges, although they are quite inaccessible in some places. In between is a hilly landscape that is quite heavily wooded with mixed forest. Towards the coast the landscape changes into lowlands with peat bogs called pocosin. The climate is warm and humid in summer with temperatures hovering around 35-37 degrees. In winter there can be a lot of snow or a lot of ice, but it doesn’t get really cold. There is quite a lot of precipitation, about 1350 mm per year. Humidity is high and the state is occasionally visited by hurricanes and tornadoes.

Blue Ridge Parkway is a highway through beautiful landscapes and nature. The road runs through the mountains from Cherokee past Asheville and Blowing Rock toward the state of Virginia. Along the way you will find one of the oldest mountains in the world, but also the highest mountain in the east of America, namely Mount Mitchell at 2037 meters. Along the way you can make several stops to discover the Cherokee culture and traditions and to view nature and waterfalls.

North Carolina’s famous Outer Banks are steeped in history. For example, these northernmost beaches were home to America’s first colony and the country’s first coast. Today, you can explore this beautiful nature reserve through a variety of options by land, sea and air. You will find beautiful beaches and sand dunes, game reserves, historic villages, lighthouses and wild Spanish Mustangs here. 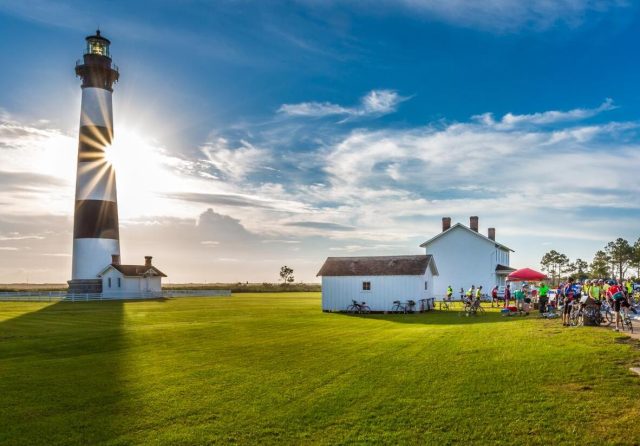