South Carolina is one of the states of the United States. The standard abbreviation for the “Palmetto State”, as it is nicknamed, is SC. The capital is Colombia. For fun ideas from the locals, check out Ask a Local!

The area now called South Carolina was originally settled by indigenous tribes such as the Creek Indians. Named after the British King Charles I, South Carolina was one of thirteen colonies that revolted against English rule in the 18th century (see: American Revolution). On May 23, 1788, it became the 8th state of the United States. South Carolina, home to a relatively high number of slaves, sided with the Confederacy during the American Civil War. Fort Sumter saw the first fighting of that war in April 1861.

The state of South Carolina covers 82,965 km², of which 78,051 km² is land. It is in the Eastern time zone. Located on the Atlantic Ocean, South Carolina borders the state of North Carolina to the north and Georgia to the west. The most important river is the Savannah, which forms much of the border with Georgia and flows into the ocean at the state’s town of the same name. Off the coast are numerous small islands. The largest lakes in the state are Lake Marion, Lake Moultrie, Lake Murray, Hartwell Lake, Russell Lake, and Clarks Hill Lake. The northwest of the state is the most hilly, with the top of Sassafras Mountain (1085 m) being the highest point.

In 2000, South Carolina had 4,012,012 inhabitants (48 per km²), of which about 55% of the population lives in an urban area. The largest cities are capital Columbia, Spartanburg, Greenville and Charleston. See how many cities are in South Carolina. The gross product of the state in 2001 was $115 billion.

Myrtle Beach has the best family beaches on South Carolina’s east coast and the best activities for any vacation. The Grand Strand is the best place to enjoy the sun, the sea and various water sports. Myrtle Beach is also known for its professional golf courses. In the vicinity of the Grand Strand you can enjoy delicious food and Las Vegas entertainment with dancers and live music.

Southern Charleston is seen as a cultural hotspot with a rich history. Experience what the city and life was like hundreds of years ago at Charles Towne Landing State Historic Site. Walk along the harbor, White Point Garden and visit St. Phillips Cemetery to get a good sense of the city. 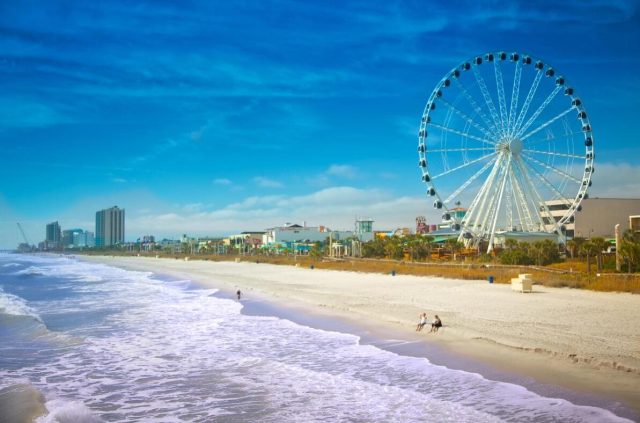