South Dakota (Dutch: Zuid-Dakota) is one of the states of the United States. The standard abbreviation for the “Mount Rushmore State”, as it is nicknamed, is SD. The capital is Pierre.

The area now called South Dakota was originally settled by the Indian tribes like the Lakota, who are also known as the Dakota or the Sioux. Lakota means “friend”. After that, the region was in French hands for a long time. A portion of the state was acquired by the United States in a transaction that has come to be known as the Louisiana Purchase. The rest followed in 1818, when a treaty about this was concluded with the English. On November 2, 1889, North Dakota and South Dakota formally became states of the United States as the 39th and 40th states. On December 29, 1890, a massacre took place near the town of Wounded Knee.

The state of South Dakota belongs to the Great Plains region and covers 199,905 km², of which 196,735 km² is land. The west belongs to the Mountain time zone, the east to the Central time zone. South Dakota borders North Dakota to the north, Montana and Wyoming to the west, Minnesota and Iowa to the east, and Nebraska to the south. The main river is the Missouri. Most of the state is fairly flat, but to the west are the Black Hills and the Badlands. The highest point is Harney Peak (2207 m). In the Black Hills is the world famous Mount Rushmore monument. The Badlands are rich in fossils.

In 2000, South Dakota had a population of 754,890 (3.8 per km²) of which approximately 50% of the population lives in urban areas. The largest city is Sioux Falls, in the southeast. See how many cities are in South Dakota. There are extensive Indian reservations in the state. The gross product of the state was $100 billion in 2006.

Badlands National Park is located near the Black Hills of South Dakota, a 1-hour drive from Rapid City. In the park you will find ancient rock formations in a vast prairie landscape, where fossils are still found that are millions of years old. Drive the Badlands Loop Road for the spectacular views along the way.

Mount Rushmore (in full: Mount Rushmore National Memorial) is a national park located in the Black Hills near Keystone, South Dakota. It commemorates the birth, growth and development of the United States of America. The surface is about 5 km².

Between 1927 and October 31, 1941, some 400 workers led by Gutzon Borglum carved the 60-foot-tall busts of United States presidents George Washington (President), Thomas Jefferson, Theodore Roosevelt, and Abraham Lincoln. It symbolizes the first 150 years of United States history. South Dakota is nicknamed Mount Rushmore State, thanks to its national park, and it also shows this in its flag.

Mount Rushmore is controversial among Native Americans because the United States conquered the Lakota area after the Black Hills War in 1876–77. The Treaty of Fort Laramie (1868) had previously assigned the Black Hills or Black Hills to the Lakota. The Lakota consider the hills sacred, although historians assume that the Lakota forcibly took control of the hills after a victory over the Cheyene in 1776. In 1971, members of the American Indian Movement led an occupation of the monument, calling it “ Mount Crazy Horse”. Among the participants were young activists, grandparents, children and the Lokota holy man John Fire aka Lame Deer. He planted a prayer staff on top of the mountain.

Mount Rushmore is the main tourist attraction for South Dakota. In 2004, more than 2 million visitors traveled to the memorial. The Lincoln Borglum Museum is also located on the site. It includes two theaters showing a 13 minute film about Mount Rushmore. 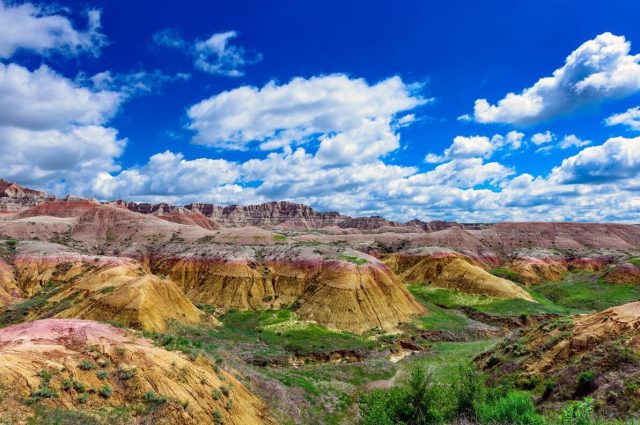