Utah is one of the states of the United States with the standard abbreviation UT. Its nickname is Beehive State and the capital of Utah is Salt Lake City. On this page you can read interesting travel information about Utah. Learn about the history, geography and famous National Parks.

Utah’s history differs significantly from that of the other states. Before the arrival of Europeans to the New World, the area was populated by Indian tribes such as the Uintah, Ouray and Utes, after whom the state is named. On July 24, 1847, the first Mormon settlers arrived in the area, far removed from other American settlements at the time. At that time, the region still belonged to Mexico, which had to cede it to the United States after a war in 1848. It was not until January 4, 1896, that Utah formally became the 45th state of the United States. Local leaders had advocated this for more than forty years, but each time they encountered resistance from the federal government, which demanded, among other things, that polygamy be abolished.

The state of Utah covers 220,080 km², of which 212,988 km² is land and is located in the Mountain time zone. In the east are extensive Indian reservations. Utah borders Idaho and Wyoming to the north, Nevada to the west, Colorado to the east and Arizona to the south. Furthermore, in the southeast, it shares a vertex with New Mexico. This point, where Utah, Colorado, New Mexico and Arizona meet, is called Four Corners and is the only four-state point in the United States.

Central and eastern Utah are dominated by the Rocky Mountains. The highest point is Kings Peak (4123 m). To the west are the Great Salt Lake and large salt flats. Many speed records have been broken during tests that could take place on the extremely flat and extinct surface. The Colorado River flows through the southeast of the state. Utah has some National Parks, including Bryce Canyon and Zion.

Dozens of actors and other contributors to the John Wayne film The Conqueror (1956) died of cancer. The film was shot near the small town of St. George in southwest Utah, near a nuclear test site. At Promontory Point, the first transcontinental railroad in the United States was completed on May 10, 1869.

Bryce Canyon is a National Park located in the southwestern US state of Utah. Bryce Canyon is famous for its unique geological rock formations. Due to the interacting forces of freezing and thawing, the lime and sandstone formations are slowly eroded to form the so-called hoodoos. The worn tops create beautiful formations that seem very mysterious in the sunlight. The sun creates beautiful shades of the colors of the rocks. The colors range from pink to orange.

The park gets its name from Mormon pioneer Ebenezer Bryce, who lived at the base of Bryce Canyon from 1875 to 1880. In 1924 the area was declared a national park. In ancient times, Bryce Canyon was a drovers’ nightmare; it was impossible to maintain an overview of the herd in this area.

Hoodoos in Bryce Canyon are formed by two processes. The first process, frost weathering, exerts its influence mainly in winter. Water seeps into small cracks in the rock. When the water freezes, it expands, widening the crack. The ice melts, more water runs into the crack, and the water freezes again. Cracks can become so large in this way that pieces of rock break off.

That’s where the second process continues: Rain takes the bits of rock broken off by the freezing and thawing of water into cracks. The rain also contributes to the erosion of the rock because it is somewhat acidic. Limestone, which makes up hoodoos, dissolves in it. These processes have caused the formation of these rock formations, but will also cause their degradation. In Bryce Canyon, the erosion rate is about 0.6-1.3 meters per 100 years.

A free shuttle bus runs from one viewpoint to another in this park. These are points from which you have a nice view of the whole valley, especially at sunrise and sunset, for example Sunrise Point, Sunset Point, Inspiration Point, Bryce Point and Fairyland Point. You can walk with a guide or on mules. Many of the rocks have names, such as ‘the submarine’ and ‘the naked woman’. As in many National Parks, everything is well organized and marked. Information and tickets are available in the visitor centers.

Zion National Park is a nature reserve in the United States. It became a National Monument in 1909 and a National Park in 1919. In 1937 the park was expanded with Kolob. The name Zion comes from the Mormons, a religion (located mainly in Utah ) similar to the followers of Jehovah. ‘Zion’ is Mormon for a place of tranquility and safety. It got this name from Mormon pioneers in 1860. The name Kolob also comes from that religion, it means: a place close to God. 2000 years ago Anasazi also lived here until about 800 years ago. Then the Paiutes lived here until the Mormon pioneers arrived here.

The park has 800 species of plants, 75 species of mammals, 271 birds, 32 reptiles and amphibians, and 8 species of fish. Examples include deer, lizards, and endangered species such as the Peregrine Falcon, the Mexican Spotted Owl, the Southwest Willow Flycatcher, and the Zion Snail. These animals cannot be found anywhere else in the world. 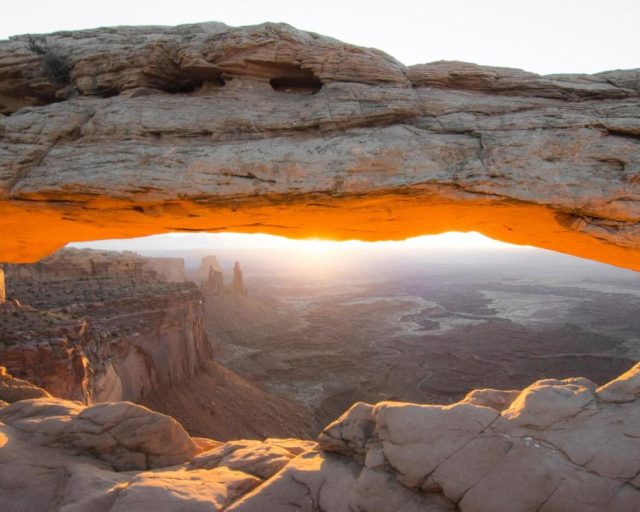