Vermont is one of the states of the United States. The standard abbreviation for the “Green Mountain State”, as it is nicknamed (see also under History), is VT. The capital is Montpelier. The largest city is Burlington. See how many cities are in Vermont. Vermont is famous for its beautiful scenery, beautiful fall colors, idyllic villages with white houses and churches, dairy products and maple syrup (maple sirup). It is also known for its progressive politics and its independent political thinking.

The area now called Vermont was originally settled by Native American tribes such as the Iroquois, Algonquin, and Abenaki. In 1609, French explorer Samuel de Champlain claimed an area near what is now Lake Champlain. He gave the neighboring mountains the name Les Verts Monts (“the green mountains”), which was later corrupted into the current name of the state. After the Treaty of Paris (1763) the area came under British control. Parts of the present state fell under the neighboring colonies (later states) of New York and New Hampshire. An independent republic was proclaimed in Vermont in 1777. On March 4, 1791, it formally became the 14th state of the United States. During the American Civil War, it sided with the Union.

On October 28, 2005, about 250 Vermonters gathered in the State House in Montpelier for the Vermont Independence Convention, the “first state-wide secession meeting held since North Carolina voted to secede from the Union on May 20, 1861.” The Vermont secessionist movement is one of the strongest in the United States, uniting among others conservative gun owners and progressive “greens” who have in common their dissatisfaction with Washington politics. This has recently revived the discussion as to whether a state can withdraw from the American union. Proponents think so: they have joined the union voluntarily and are therefore also demanding the right to leave. However, a number of legal scholars in the United States believe that Vermont has also entered into a contract with the American nation by joining that it can no longer undo. They therefore did not consider separation permissible.

The state of Vermont covers 24,923 km², of which 23,974 km² is land. It is in the Eastern time zone. Vermont is bordered by Canada to the north, New York State to the west, New Hampshire to the east, and Massachusetts to the south. The main river is the Connecticut River, which defines the entire New Hampshire border. The elongated Lake Champlain forms much of the border with New York State. Much of the state is taken up by the Green Mountains, which are part of the Appalachian Mountains. The summit of Mount Mansfield (1339 m) is the highest point in Vermont.

Vermont is home to Green Mountain National Forest. This wooded area is remarkably often green, but during the Indian Summer the fall colors are in abundance. In the autumn the area is beautiful, but also the rest of the year it is a beautiful area to visit. It is ideal for outdoor activities. Incidentally, you will also find Killington here, one of the largest ski areas in this part of America.

Burlington is located in western Vermont on the shore of Lake Champlain. In this friendly city you can cycle to your heart’s content on the twelve kilometer long Burlington Bike Path, which follows the track of the old train route. Do you like festivals? Then Burlington is the right place for you, because this city is often the setting for a fun festival. For example the Discover Jazz Festival. 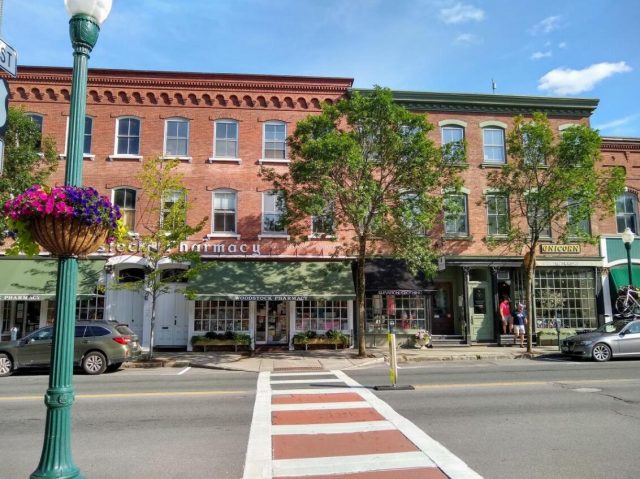