Wisconsin is one of the states of the United States. The standard abbreviation for the “Badger State,” as it is nicknamed, is WI. The capital is Madison. The state’s name is derived from the Wisconsin River, which flows through the state.

Before the Europeans colonized present-day Wisconsin, it was inhabited by various Native American peoples. Until the 18th century, the area was in French hands, who lost it to the English. The name is derived via French from a Myamia word that would mean “this river meanders through red rock”, a reference to the red sandstone cliffs of the Wisconsin Dells. Wisconsin also originally included an area that was added to Michigan in 1835 and is now known as the Upper Peninsula. On May 29, 1848, Wisconsin formally became the 30th state of the United States. It was part of the Union during the American Civil War.

A group of Catholic Dutchmen, consisting mainly of poor smallholder farmers from North Brabant and Limburg, left for the state of Wisconsin, where they settled in Little Chute and Green Bay, among other places.

The state of Wisconsin covers 169,790 km², of which 140,787 km² is land. The state is located in the Central time zone. Wisconsin borders Michigan to the north, Minnesota and Iowa to the west, and Illinois to the south.

Wisconsin is located on two of the Great Lakes: Lake Superior and Lake Michigan. The western border is largely formed by the St. Croix River and the Mississippi. The Wisconsin, which flows into the Mississippi, flows through the state. Wisconsin also has many lakes, of which Lake Winnebago is the largest. The state is quite flat; the highest point is the summit of Timms Hill (595 m).

In 2000, Wisconsin had a population of 5,363,675 (32 per km²). The largest city in Wisconsin is Milwaukee. Other cities include the capital Madison, Green Bay, Kenosha, Racine, Appleton, Oshkosh and Eau Claire. See how many cities are in Wisconsin. The gross product of the state in 2001 was $177 billion. 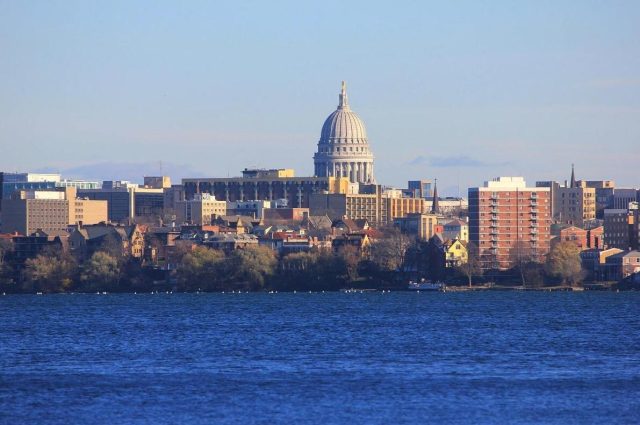