Wyoming is one of the states of the United States. The standard abbreviation for the “Equality State”, as it is nicknamed, is WY. The capital is Cheyenne. Get inspired with our Wyoming travel information and visit this beautiful state.

The area now called Wyoming was originally settled by Native American tribes. After that, the region was in French hands for a long time. Most of the state was acquired by the United States in 1803 through a transaction that has come to be known as the Louisiana Purchase. Wyoming formally became the 44th state of the United States on July 10, 1890. The state is named after the Wyoming Valley in northeastern Pennsylvania, where the first settlers in the state are said to have come from. In 1869, Wyoming was the very first region in the United States to introduce women’s suffrage.

The state of Wyoming covers 253,554 km², of which 251,706 km² is land. Wyoming and Colorado are the only states that are exactly rectangular, excluding the curvature of the Earth’s surface. Wyoming is in the Mountain time zone. Wyoming is bordered by the state of Montana to the north, Idaho and Utah to the west, South Dakota and Nebraska to the east, and Colorado to the south. The main river is the Platte. The largest lakes are Yellowstone Lake, Jackson Lake and the Flaming Gorge Reservoir. Wyoming is bisected by the Rocky Mountains, and large parts of the state are very mountainous. The highest point is the top of Gannett Peak (4207 m). In the east of the state is a small part of the Black Hills, the rest of which are in South Dakota. The Black Hills are surrounded by the flat Great Plains.

Of course, the natural beauty should not be missing in our tips and travel information about Wyoming. In the northwest of the state is the famous Yellowstone National Park, which includes many geysers. North of Jackson is the National Elk Refuge, a sanctuary where thousands of moose winter each year. The state is also home to many of the last wild horses. What is believed to be the first dinosaur fossil find in Wyoming was made at Como Bluff in 1878, a result of the construction of the Union Pacific Railroad. The place is now also called Dinosaur Graveyard. In Wyoming, the black-footed ferret, a long-extinct mustelid, has been reintroduced.

In 2005, Wyoming had a population of 509,294 (5.2 per square mile), the lowest of any of the 50 states. The largest city is the capital Cheyenne, in the southeast. In the west of the state is the large Wind River Indian Reservation. See how many cities are in Wyoming.

The gross product of the state in 2001 was 20 billion dollars. With a GDP of $47,400, the state is one of the richest in the US. Wyoming ranks 6th in the ranking of states with the highest quality of life (2006). The main economic sectors are mining and tourism. The state is one of the safest in the United States and is at the bottom of the crime rankings. Wyoming invests $243 per resident in policing and legal support. Wyoming has one of the lowest taxes in the US: no income tax, no corporate tax, and no inheritance tax. The “sales tax”, a tax on consumption, is 4%. The counties can impose a property tax of up to 1.2%, the state can tax up to 0.8% of the property.

Grand Teton National Park is adjacent to the south of Yellowstone National Park. This park contains the Teton Mountains with its characteristic peaks, the highest peak of which is called the Grand Teton. The park offers completely different nature than Yellowstone and is very suitable for mountain climbing, horseback riding and rafting or canoeing on the Snake River. You can also spot wildlife here very well, because in this park live bison, bears, wolves and moose.

Yellowstone National Park is not only the first national park in the United States, but also the first in the world. It was founded on March 1, 1872. The park is largely located in Wyoming and is known for its many geothermal phenomena, resulting from the Yellowstone supervolcano. You will find dozens of colorful hot springs and geysers. 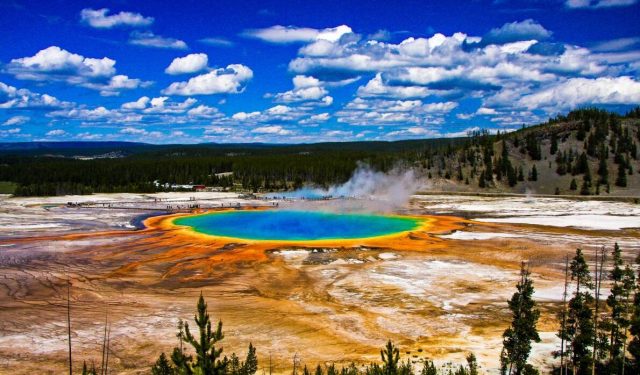