Montana is one of the states of the United States. The standard abbreviation for the “Treasure State”, as it is nicknamed, is MT. The capital is Helena.

The area now called Montana was originally settled by Native American tribes. After that, the region was in French hands for a long time. Most of the state was acquired by the United States in a transaction that has come to be known as the Louisiana Purchase. The rest followed in 1846, when a treaty about this was concluded with the English; see Oregon territory. The Indians in this area vehemently resist the taking of their land. Known is the battle of the Little Bighorn on June 25, 1876, in which General George Armstrong Custer was killed. On November 8, 1889, Montana formally became the 41st state of the United States. The name Montana probably comes from the Spanish word montaña, which means “mountain”.

The state of Montana covers 381,156 km², of which 377,295 km² is land. The state belongs to the Mountain time zone. Montana borders Canada to the north, Idaho to the west, North Dakota and South Dakota to the east, and Wyoming to the south. The main river is the Missouri, which originates in this state. Major lakes in Montana include Fort Peck Lake and Flathead Lake. The east of the state is relatively flat; the west is dominated by the Rocky Mountains. The highest point is the top of Granite Peak (3901 m). Montana is very rich in natural beauty. Examples are Glacier National Park and the Pompey’s Pillar discovered by William Clark on July 25, 1806.

In 2000, Montana had 902,195 inhabitants (2.4 per km²). The largest city is Billings; some other larger towns include Bozeman, Butte, and Great Falls. See how many cities are in Montana. There are extensive Indian reservations in the state. The gross product of the state in 2001 was $23 billion.

The Beartooth Highway in southern Montana is considered one of the most scenic roads in America. The 104 km route begins in Red Lodge and ends in Cooke City, one of Yellowstone’s two northern entrances. You drive straight through the Beartooth mountain range, with the Beartooth Pass as the high point at 3300 meters! Along the way, enjoy views of the entire mountain range.

Also known as ‘The Crown of the Continent’, Glacier National Park is Montana’s calling card. The park has more than 4000 km2 of mountain ranges, wilderness and huge glaciers, dating back to the last ice age. The melting glaciers have created waterfalls and large clear blue lakes. This park is a walker’s paradise with over 1,100km of trails. 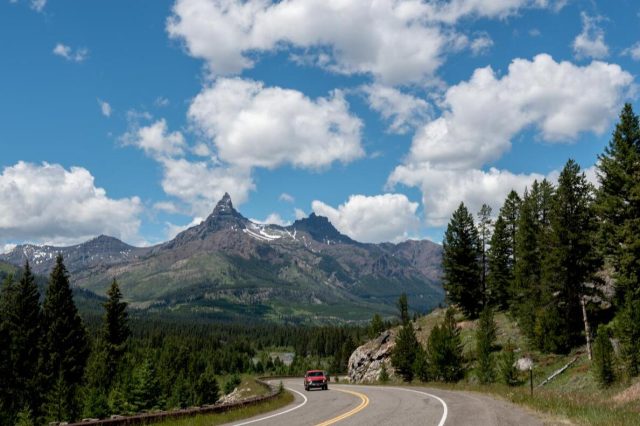