Oklahoma is one of the states of the United States. The standard abbreviation for the “Sooner State”, as it is nicknamed (see also below), is OK. The capital is Oklahoma City.

The area now called Oklahoma was originally settled by Native American tribes such as the Caddo, whose descendants still live today. After that, the region was in the hands of the French for a long time. For several decades at the end of the 18th century, Spain controlled the area. France eventually sold it to the United States in 1803 (see Louisiana Purchase). In the 1830-40s, many Indians from other parts of the country were transferred to the region. The Choctaw Indians, one of the tribes that suffered this fate, gave Oklahoma its current name. In their language okla means something like “people” and homa “red”. Places like Tulsa, Thalequah and Muskogee were founded by Native Americans.

Some Indian tribes employed black slaves. During the American Civil War, certain tribes sided with the Confederacy, for which they were severely punished by the federal government. In 1889 the government took back most of the land given to them from the Indians. From April 22 of that year it could be taken into possession by settlers free of charge. Those who claimed land a little earlier were called Sooners. Oklahoma became the 46th state of the United States on November 16, 1907.

In the early 20th century, large-scale oil extraction began in the Tulsa area, attracting even more people to the area. During the Depression years, drought and misuse of land led to the Dust Bowl. Fertile soil was blown away in great storms, forcing many farmers to flee the state. This was the subject of John Steinbeck’s novel The Grapes of Wrath and Dorothea Lange’s photographs.

The state of Oklahoma covers 181,196 km², of which 178,023 km² is land. It belongs to the Central time zone. Oklahoma is bordered to the north by the states of Kansas and Colorado, to the west by New Mexico, to the east by Missouri and Arkansas, and to the south by Texas. The major rivers are the Red, which defines much of the Texas border, the Arkansas, and the South Canadian. Oklahoma has many larger and smaller lakes, such as Lake Texoma and Eufala Lake. The southeast of the state is the most hilly, but the highest point is the peak of Black Mesa (1516 m) in the far northwest.

On April 19, 1995, Timothy McVeigh bombed a federal government building in Oklahoma City, killing 168 people (the Oklahoma City Bombing). Oklahoma is located in the part of the United States that has been nicknamed Tornado Alley (Tornado Alley) because of the large number of tornadoes that occur here. On May 3, 1999, Oklahoma was hit by a series of tornadoes, one of which with wind speeds of up to 510 kilometers per hour is the heaviest ever recorded. This tornado reached the suburbs of Oklahoma City. 46 People lost their lives. Oklahoma City has a 345% greater chance of a tornado than the US average. Mathematician Martin Gardner and entertainer Will Rogers were born in Oklahoma. 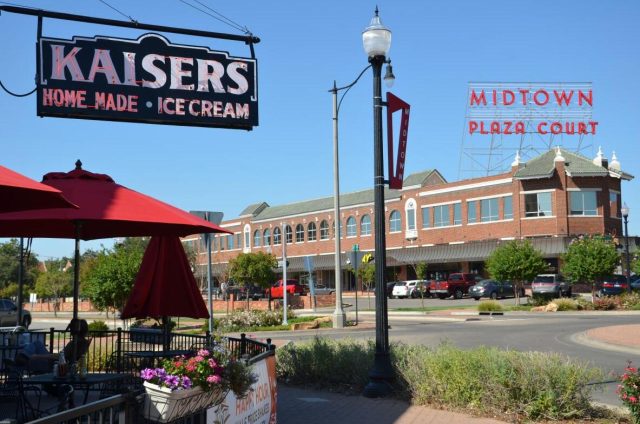