Nebraska is one of the states of the United States. The standard abbreviation for the “Cornhusker State”, as it is nicknamed, is NE. The capital is Lincoln, although Omaha is larger.

The area that now forms the state of Nebraska was originally settled by Native American tribes. Nebraska, meaning “flat water,” was the name the Native Americans gave to the river now called the Platte (see below).

It was in French hands for a long time. Spain owned it for several decades in the second half of the 18th century. France eventually sold it to the United States in 1803 (see Louisiana Purchase). On March 1, 1867, Nebraska formally became the 37th state of the United States. The first significant numbers of settlers settled in the area in the 1860s.

The state of Nebraska covers 200,520 km². The west of the state belongs to the Mountain time zone, the east to the Central time zone. Nebraska borders South Dakota to the north, Wyoming to the west, Iowa and Missouri to the east, and Colorado and Kansas to the south.

Nebraska is quite flat in places, but most of it is hilly. The highest point is 1653 m.

In 2000, Nebraska had 1,711,263 residents (8.5 per km²), of which about 66% of the population lives in urban areas. The largest cities are Omaha and the capital Lincoln. See how many cities are in Nebraska. The median per capita income is quite normal at the American level. Just about everywhere in Nebraska there is a lot of agriculture and there is also a large meat processing industry in Nebraska. Omaha is one of the most meat-packing cities in the world. The gross product of the state in 2001 was 57 billion dollars.

Nebraska is a low-tourist state. Omaha is the largest city in Nebraska and is located in the middle of America. This welcoming city has a great diversity when it comes to culture and history. There are also many city parks. When visiting Omaha, don’t miss Omaha’s Henry Doorly Zoo and Aquarium. 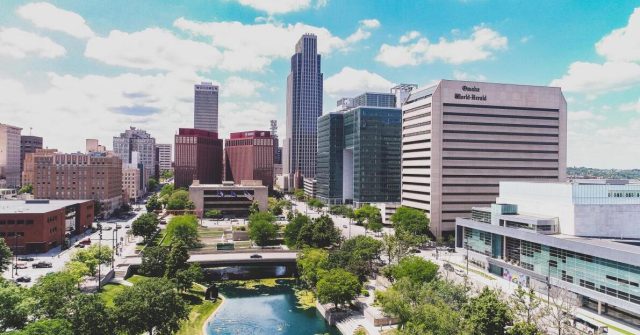