New Jersey (Dutch: Nieuw-Jersey) is one of the states of the United States. The standard abbreviation for New Jersey is NJ. The capital is Trenton.

New Jersey originated from a Swedish colony called New Sweden. Its population was small and consisted mainly of Finns. After about 17 years as a Swedish possession, the area was conquered in 1655 by the Dutch from the more northerly colony of New Netherland. In 1643, in Pavonia (now Jersey City), a massacre of Dutch settlers against Indians, ordered by Governor Willem Kieft of New Netherland, killed 120 Indians, including women and children. This attack was part of the Kieft War (1643-1645). New Jersey began on March 12, 1664 as a private colony of the British Sir George Carteret and Lord Berkeley. They had been given the territory of the Duke of York, later King James II. It was part of a piece of land that James had been given by his brother, King Charles II.

In the first ten years mainly settlers from New England settled there. On March 18, 1673, Berkeley sold its half, the west, to a group of English Quakers, who then settled near the Delaware River. Between 1674 and 1702, New Jersey consisted of two counties, West Jersey and East Jersey. New Jersey was one of thirteen colonies to rebel against British rule. Important battles took place at Trenton and Princeton. On December 18, 1787, New Jersey became the 3rd state of the United States. New Jersey was the last of the Northern states to abolish slavery on February 15, 1804.

The state of New Jersey covers 22,608 km², of which 19,231 km² is land. The highest point (550 m) is in the far north of the state. From north to south, the total length is 267 km. The widest point from east to west is 199 km wide. New Jersey is located on the Atlantic Ocean. It borders New York State to the north and Pennsylvania to the westand Delaware. The entire western border is formed by the Delaware River. The state belongs to the Eastern time zone. The main conurbation is northeastern Newark, which is effectively integrated with New York City. In the west, several places have merged with Philadelphia, located on the other side of the Delaware, in Pennsylvania. Other great places in New Jersey are capital Trenton and gambling city Atlantic City. See how many cities are in New Jersey.

In 2000, New Jersey had a population of 8,414,350. This equates to 372 inhabitants per km², making it the most populous state. The gross product of the state in 1999 was $332 billion. In the 18th century, New Jersey was nicknamed the “Garden State” because of its fertile soil, but it later became one of the most industrialized states. Near Trenton is the famous Princeton University.

Welcome to Las Vegas of the East! Atlantic City is best known for its beach, the famous 8-mile Atlantic City Boardwalk and many casinos. Most restaurants and casinos are located on or near the boulevard and there is something for everyone. From Atlantic City you are also within a short time at Cape May, a typical American seaside resort with Victorian houses and a luxurious atmosphere.

From thrill seekers to peace seekers

Six Flags Great Adventure in New Jersey is in the Gusiness Book of Records for its large amount of attractions! Thrillseekers will not be disappointed here, as the tallest roller coaster in the world, Kingda Ka, is located in this park. Do you prefer the beach? Then go to one of the coastal towns such as Wildwoods or Seaside Hights. Nature lovers head to Washington Crossing State Park, Paterson Great Falls or Island Beach State Park. 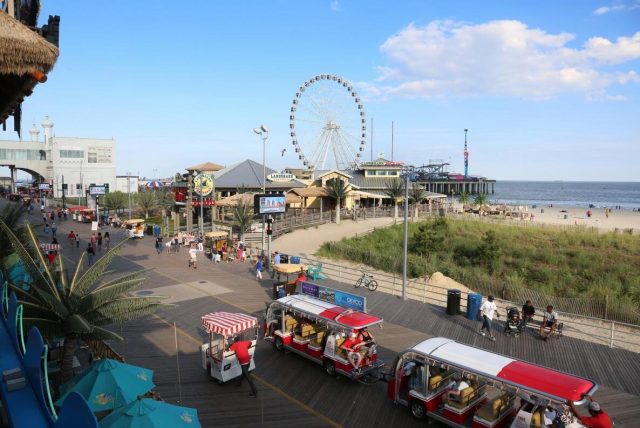